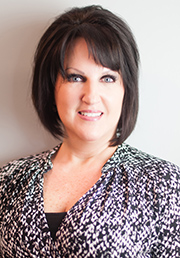 Becky Palisin has been with David High, MD, for over 26 years. She was raised in Coral Springs, Florida, and relocated to NJ in 1993 when her parents were transferred here. The first job she landed was with David High, MD. He was the only one in practice at that time. She started at the front desk, then did the billing, later became his only medical assistant to improve efficiency, and allow him to increase patient volume. After seven years, she became the practice administrator and has held that position for most of her time with David High, MD. She has been a big part of the practice, now known as Accent Dermatology, growing to three MDs, a nurse practitioner, and in 2010 opened a medical spa with one esthetician. The practice has grown tremendously over the years, and in 2010 they relocated to a larger office located on Stokes Road where the practice is currently located. Becky has surrounded herself with a great support staff of medical assistants, receptionists, and a billing manager, many of whom have been employed by her for over 20 years. Becky takes much pride in her position with Accent Dermatology and has a great passion for the staff and their patients.
In her spare time, Becky enjoys spending time with her family and two rescued dogs, Niko and Kodi.