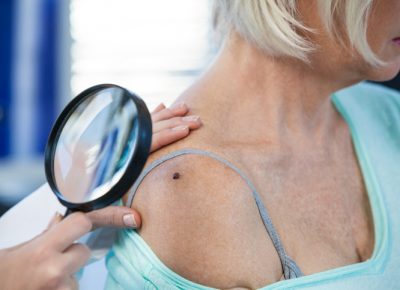 Melanoma, also known as malignant is a type of cancer that develops from the pigment-containing cells known as melanocytes. Melanomas typically occur in the skin, but may rarely occur in the mouth, intestines, or eye (uveal melanoma). Though yearly skin exams by your physician, and routine self-exam done at home can help, the only accurate way to diagnosis melanoma is with a biopsy. During the biopsy, all or part of the suspicious lesion is removed, and a pathologist examines the sample. If you receive a melanoma diagnosis, the next step is to determine the stage of the cancer, which will determine how it will be treated. Melanoma is the deadliest form of skin cancer because it can rapidly spread to the lymphatic system and internal organs. Approximately one person dies from melanoma every hour. With early detection and proper treatment, the cure rate for melanoma is almost 100 percent. Once it spreads, the cure rate drops.

Treatment options may include: