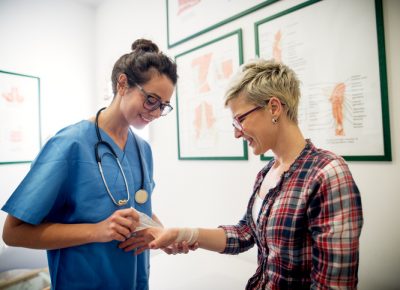 Our doctors can perform a number of procedures in our offices. These treatments are less invasive and very convenient for our patients. If you have a skin discoloration, abnormal lesions or moles, we strongly encourage you to see a dermatologist immediately.

Below are some common office procedures we routinely perform. We have included each procedure’s definition as termed by the American Society for Dermatological Surgery and the American Academy of Dermatology.

Laser hair removal has become one of the most common cosmetic procedures performed in the United States, ranked second among cosmetic procedures behind Botox injections in frequency of procedures performed. Laser hair removal utilizes beams of highly concentrated light designed to selectively penetrate into the hair follicles, to be absorbed by the pigment in the hair follicles and to destroy the hair within that hair follicle. A variety of lasers and light sources have been developed that may be employed in laser hair removal. This procedure was originally described to be performed on dark hairs on light skin; newer technologies have made the procedure safer for patients with darker skin and those of color. Various types of lasers are utilized with laser hair removal – the most common of which are alexandrite, diode, Neodymium YAG and intense pulsed light sources.

We use a Candela GenteLase Laser. We use this advanced laser to remove excessive hair, age spots and more.  Its patented cooling feature helps ensure that treatments are both comfortable and effective.

Sclerotherapy is considered the gold standard treatment for removing spider and some varicose leg veins. It is a very cost-effective procedure that seldom leaves a scar or produces adverse effects. It is typically performed on an outpatient basis by a dermasurgeon. A concentrated saline or specially developed chemical solution is injected with a very small needle into the spider or varicose vein. The solution causes the vein to close up or collapse and become scar tissue that is eventually absorbed by the body. The work of carrying the blood is shifted to other healthy blood vessels nearby.

Sclerotherapy generally requires multiple treatment sessions. One to three injections are usually required to effectively treat any vein. The same area should not be retreated for four to six weeks to allow for complete healing, although other areas may undergo treatment during this time. Many dermasurgeons have found that treating all abnormal veins in one session gives the best results.

Botulinum toxin is a purified toxin and, when given orally in large amounts, it blocks the nerve signals from the brain to the muscle, causing a generalized paralysis called botulism.

However, by injecting very tiny amounts into a specific facial muscle, only the targeted impulse of that muscle will be blocked, causing a local relaxation and weakness. In this way, botulinum toxin acts as a muscle blockade to immobilize the underlying cause of the unwanted lines and prevent “wrinkly” expressions.

Botulinum toxin has been used since 1980 to treat many muscle disorders, such as lazy eye, eye ticks and uncontrolled blinking. Pioneered by Dermasurgeons in 1987, the use of botulinum toxin for cosmetic purposes is an unapproved, or “off-label” use of a FDA-cleared drug.

Lentigo is a small brownish spot (of the pigment melanin) on the skin. These are commonly known as “sun spots” or “liver spots”. When the laser light is directed at skin tissue, its light energy is absorbed by water or pigments found in the skin. Water is found in large amounts in all living cells. Pigments of the skin include hemoglobin, a protein that makes blood red, and melanin, the tan or brown-colored pigment. All three targets absorb laser light of different colors. This allows us to remove these Solar Lentigos.

During dermabrasion, or surgical skin planning, the doctor then removes or “sands” the skin to improve the contour and achieve a rejuvenated appearance as a new layer of remodeled skin replaces the damaged skin. The new skin generally has a smoother and refreshed appearance. Results are generally quite remarkable and long lasting.